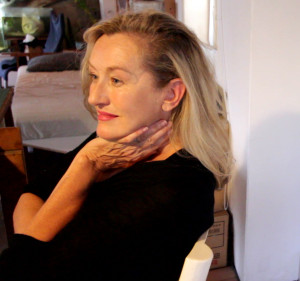 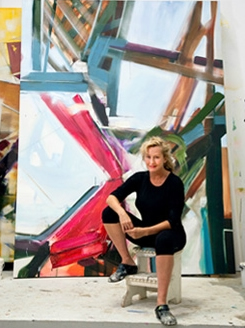 My paintings derive their inspiration from the world in which I live and work. I tend to wander through new places, interiors or cities with their endlessly shifting landscapes, often incongruous, and always progressively changing, I record my perceptions like metaphorical footnotes; the stains, textures, and marks imprinted onto the pavement comprise the passing of thousands of feet transformed into a kind of mind map of daily life. I record this visual information as if collecting crime scene evidence, often assembling digital images for reference later on. The tally of information and my own initial response to these stimuli must be sifted through and absorbed. Finding that balance between the restraints of representation and the vast ambiguities of abstraction is a process in constant flux, where formal concerns tether to a more chaotic impulse within the work itself. My relationship to these images is derived and ultimately synthesized through my connection to the visual world. This complex relationship is played out viscerally onto the canvas, and if it all goes well, the initial “hit” you get when seeing these paintings is a kind of presence, experiential, primal. Further development of the work necessitates a layered process wherein my own involvement varies to include a balance of boldness and invasiveness. There is something beyond the physical world where thoughts transmute into “things”, objects, formations in literal space and time, and my investment involves extracting meaning wherein the sacred and the profane co-exist. My fascination with the decay of once celebrated architectural buildings and spaces led me to examine how I perceive and experience our everyday world. Seeing my childhood home bulldozed to make way for a tract housing development left me with a profound sense of lost that still resonates in my mind. Within my memory are landscapes, containing objects, forms, and spaces, which I deconstruct, resurrect, and change to reflect the fleeting nature of our urban landscape, emblematic of American economic cycle of growth, decline, and rebirth. Sometime my paintings move and expand into a given space in what I call a 3-Dimensional abstract painting. The structures I set up for painting echo or reiterates the impermanent and mutable states depicted in the painting. Or put another way, painting that is not simply an illusion or picture of an event, but participating in the event itself. While I am conscious of historical precedents, and strive to expand upon the boundaries of painting, more germane to my approach is the impulse toward intuition. In the end, I try to get out of the way and let the work take on a life of its own.