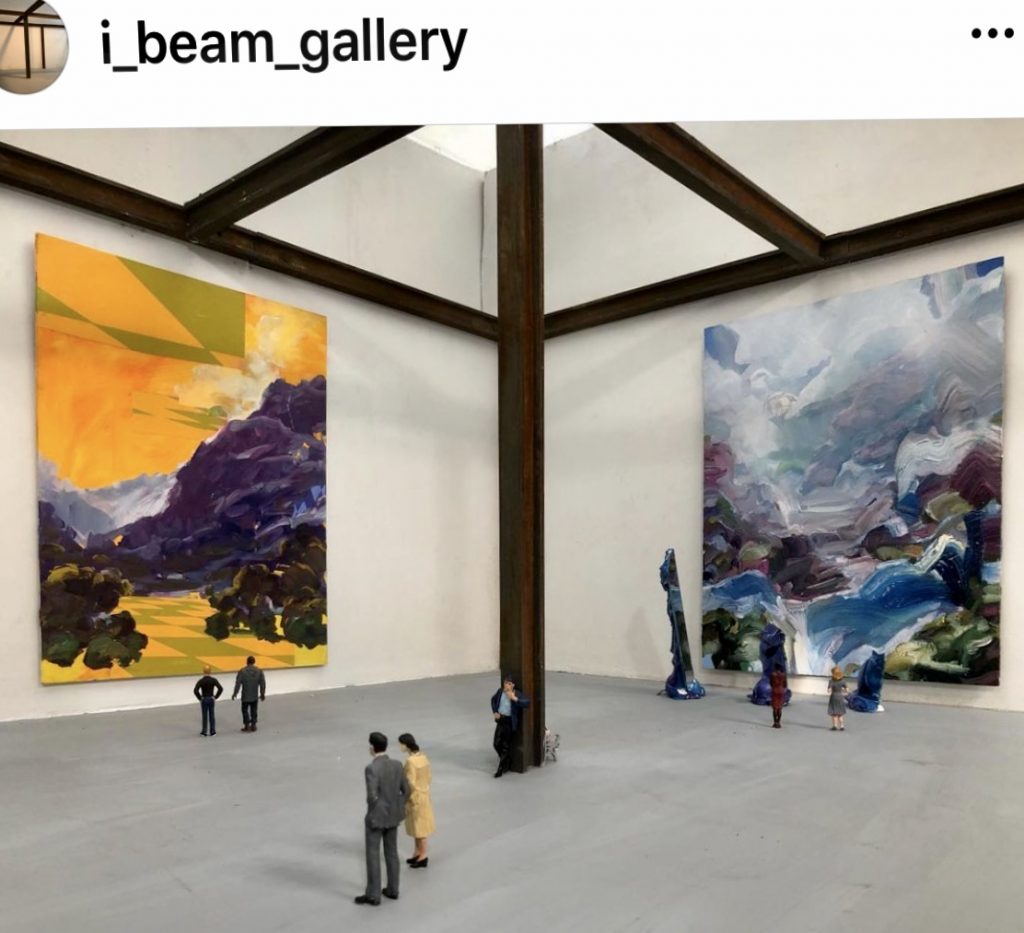 For early to mid-20th century artists, the paradigm for abstract art’s development can be expressed concisely by Dutch artist Theo Van Doesburg’s well-known Studies for Composition VIII (The Cow) c.1917, in which a series of images of a cow become progressively more abstract, culminating in the final work, Composition VIII (The Cow), c.1918. That painting, which is ostensibly a completely non-objective artwork if viewed separately from the other works, is still clearly perceptible as an image of a cow when seen in the context of the earlier images.

A similar progression from realistic depictions of objects to complete abstraction also characterizes the work of the artists most often credited with creating the first abstract artworks- Wassily Kandinsky, Piet Mondrian, Kasimir Malevich and  Hilma af Klimpt, whose realistic paintings of flowers clearly relate to the flower-like forms in  some of her paintings. Abstract art that develops from realistic imagery was also the most usual model for mid-20th century artists; virtually every Abstract Expressionist began as a figurative artist and transitioned slowly into abstraction. Some, like Jackson Pollock,

For the artists who began their careers following this period, in the late 1960s and 1970s and beyond, pure abstract art was already a given- it had been at this point already recognized and canonized, at least within the art world. For the  artists whose work developed in this period, which is the generation of artists represented in this exhibition, complete abstraction was a starting point, not a conclusion. Many began their careers as completely abstract artists in a period when the influential critic Clement Greenberg’s theories still held sway. Most began to question the notion of the completely abstract artwork, which attempts to remove any perceptible vestige of reality.

The limitations of this rhetoric were succulently expressed by Los Angeles Joe Goode, who commented that “following Greenberg’s theories is the quickest way to paint yourself into a corner”. Artists began to think of ways to move the formidable formal traditions of abstraction forward by adopting a more inclusive attitude.

Constance Mallinson paints constructions made from colorful plastic trash which she collects solely on her walks around her neighborhood in Woodland Hills. The suburban streets of this San Fernando Valley community surprisingly supply all of the material required, in a similar way that Rauschenberg would be able to find materials to make his art within a one block radius of his Manhattan studio. The assembleges that Mallinson creates become the subject matter for her paintings, arranged in ways that obviously reference “all-over” abstract painting- the compositional device most fervently promoted by Greenberg. However, in a way reminiscent of early Pop artists such as Johns and Warhol, Mallinson adopts the compositional device and discards the rhetoric that the work must be non-referential. The paintings delight with there highly saturated hues and ‘old master” painting techniques that recall Baroque Dutch still life painting; this cheerful ambiance is countered by the knowledge that humanity is drowning in its own trash, plastic and otherwise. Like many current artists, Mallinson seems to feel that it is impossible not to acknowledge the environmental crisis in her work, despite her attachment to art’s formalist concerns.

Likewise, Virginia Katz creates works that clearly reference all-over abstraction, but also conjure up a myriad of art historical references from the dense compositions of Cezanne to the grid-based structures of analytical Cubism. In Katz’s case, the source of the imagery comes from seeing piles of rubble left in the aftermath of a devastating earthquake in Japan. The verdure-like hues and atmospheric  effects suggest a sense of the sublime, especially when the work is seen in the monumental scale of I-Beam Gallery. Expressively, the works recall Romanticist landscapes, but rubble also suggests a sense of entropy, akin to the natural forces that shape the world- after all, earthquakes are a natural phenomenon, even when they destroy cities built by humans.

Yvette Gellis’ paintings also recall Romanticist landscapes, where nature is seen as a powerful and ominous force. The works utilize the vocabulary of gesture, linked to Romanticism, but also one of the techniques most associated with abstract painting.

Gellis’ paintings evoke the rocky crags of 19th century artists like Casper David Friedrich, as well as recalling art historian Robert Rosenblum’s 1961 article “The Abstract Sublime”, which linked Romanticist landscape painting to the  huge abstract canvases of Clyfford Still and Barnett Newman. Some of her paintings have mirrored sculptural elements which stand in front of them, creating a link between the physical (the sculpture) and the metaphysical (the implied space of the painting.

The paintings of Marie Thibeault are amongst the most ostensibly abstract in appearance in the exhibition. Composed of dense webs of multicolored lines and shapes, they seem resolutely non-objective, yet imply a limitless space akin to that of the classic Pollock drip paintings of 1947-50. However, both of her works are responses to tangible experiences in the natural world; The Burn was painted after visiting areas of the San Gabriel Mountains north of Los Angeles that suffered extreme fire damage in the recent Bobcat Fire. With that reference in mind, the yellow ocher-hued painting with its skeletal networks of lines begins to evoke the experience of walking through the cadaverous remains of a burned forest. Less specific, Time Stamp was influenced by her isolation during the pandemic- as the artist recounts, “Time Stamp is informed by my daily walks looking out at the harbor from the hills of San Pedro . During the pandemic ( fall and winter) there was a sense of  timelessness. Sunrise, sunset. Sunrise, sunset, even though the world was tossing in turmoil.”

Danny Shain evokes the heroic forms of middle 20th century abstract painting through the use of the most banal and overlooked materials imaginable- Nymph and Sacramento (both 2021) are painted onto old hanging file folders. Translated to painting, and seen in the scale of this exhibition, the opened folders with collage elements (cards of junk mail) appear as solemn works of minimalism, like something that could have been a collaboration between Rothko and Rauschenberg.

There is something very amusing about the evocation of the sublime, the most salient effect of the paintings, through the use of materials that most people would never look at, much less use as a medium to make art. It is akin to Aldous Huxley’s seeing the divine in some folds of fabric in his well-known book The Doors of Perception.

Like Shain’s work, Bia Gayotto’s drawings are quiet and meditative. Gayotto used the technique of rubbing to make the works, applying graphite to thin tracing paper to take impressions off of redwood trees in the isolated, forested area where she lives in northern California, having recently re-located there after living many years in the Los Angeles area. After being scanned, the images were printed as pigment prints on cold press paper. The resultant drawings recall the work of early process artists from the 1970s, such as Michelle, Stuart, Robert Morris and William Anastasi who were all exhibited in the superb1999 MOCA exhibition Afterimage: Drawing Through Process.

Gayotto’s drawings possess a similar emphasis on following a pre-conceived plan rather than improvisation and share an expression of subconscious thought.

The tree trunk rubbings express a feeling for the fragility of California’s forests, recently made clear through wildfires and deaths of trees in the Sierra Nevada mountains.

Collectively, the artists in this exhibition make a powerful statement about the state of abstract art today. Abstraction is now like figuration a tradition, and it’s forms and visual vocabularies are available to be used in any way imaginable. Any art movement, from Renaissance narrative figuration to Cubism has a limited period of time in which it can claim to be new and groundbreaking; abstraction has morphed from the most radical and innovative of movements into a tradition embraced by countless artists worldwide.

These artists are carrying the torch for abstraction into the future exactly by not adhering to the doctrines imposed by mid- 20th century formalist critics. Abstraction’s morphological, highly malleable nature never did sit well with strict definitions or limitations. The work in this exhibition makes it clear abstract art often benefits from its sometime tenuous connection to the world rather than trying to remove all vestiges of material reality.

I-Beam Gallery is a virtual, fantasy space, built into the Altadena studio of artist David DiMichele. The space measures 8 x 4 x 4 feet, occupying a mere 32 square feet of real space. However, in “G” scale (1 to 22.5), the scale in which the gallery operates, it appears as vast as rooms at Dia:Beacon or the LA MOCA Geffen Contemporary, the space which inspired the use of rusted I-Beams as an architectural element.

Although the gallery is a fantasy, the art and the exhibitions are very much real. By exhibiting small works that appear to be very large, the space allows viewers to imagine the minuscule works at a monumental scale. All of the works are for sale, and a price list, which provides interested clients with the actual dimensions of the works is available upon request.

The gallery was created as a way of continuing to curate exhibitions in an artworld that currently offers few exhibition opportunities to artists because of the Covid-19 epidemic.

Currently, the exhibitions can only be seen through “virtual” means of photography, video and soon, in 3D simulations online. However, anyone with a genuine interest in purchasing a work can make an appointment to see the work in person. Likewise, members of the press can book appointments if there is an interest in covering the exhibitions. Hopefully, the gallery will be able to be open for public viewing by appointment at some future time.

For information on I-Beam Gallery, contact David DiMichele at